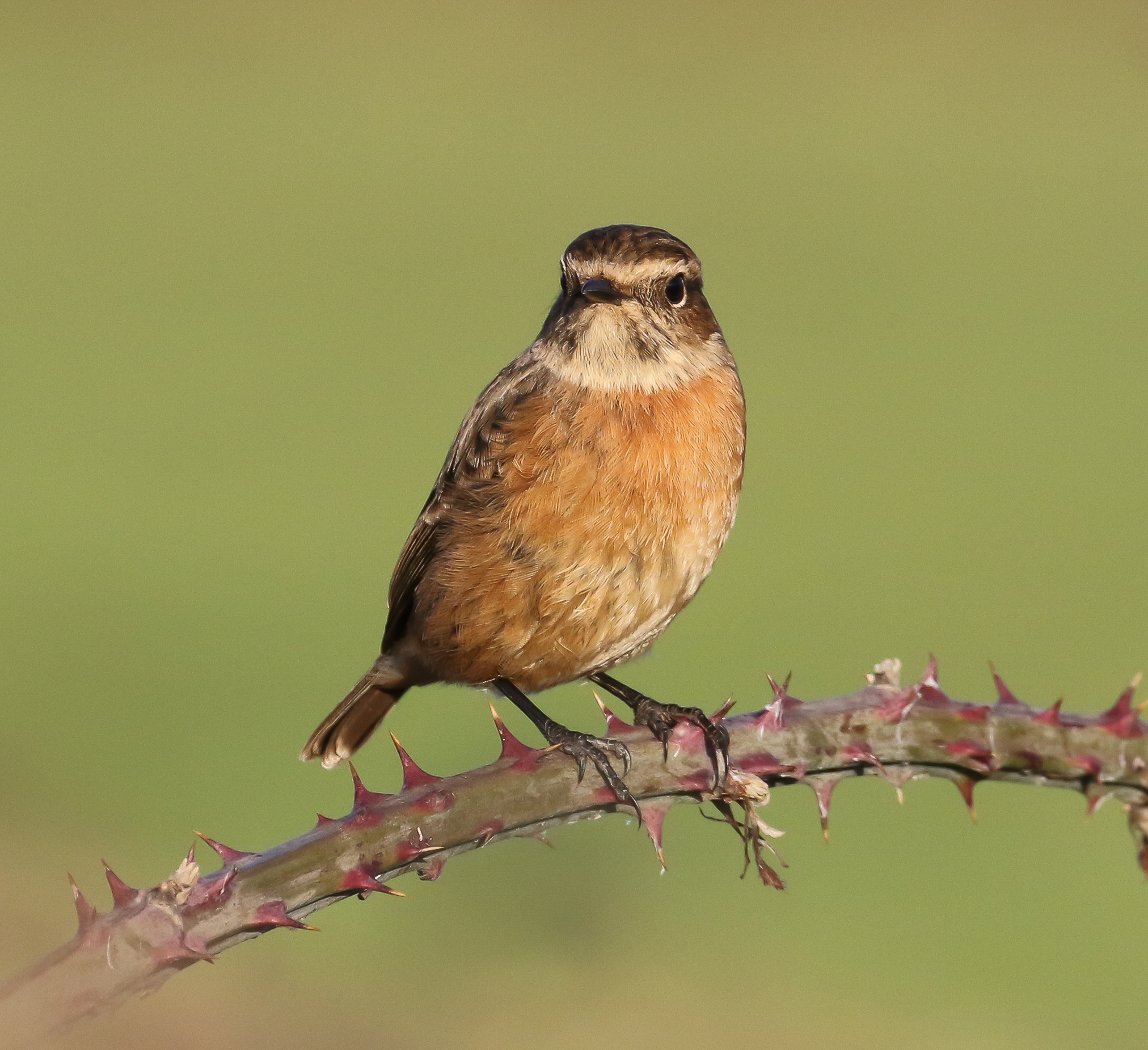 As we plod soggily away from the drainage mill which stands derelict but defiantly sentinel, the shroud of dark grey looming overhead is swept away, whipped over the flat expanse of Buckenham Marshes by a brisk sou’wester. In its wake appear blue skies, streaked with wisps of white vapour and golden hued rays of autumnal sunshine. A transformation that seemed nigh impossible an hour ago as we sheltered in the rain splattered hide overlooking a darkened world huddled under banks of rain laden cloud.

The welcome transition to more hospitable conditions allows closer inspection of the natural treasures that decorate this well managed RSPB reserve. The area really comes alive in autumn and winter when wildfowl, geese and other birds from Arctic regions seek out its lush grassland as a means to sustain them until the crooked finger of spring beckons them back north. A scan of the now bright green sward reveals several species of geese grazing contentedly. Most are feral populations of Canada, Grey-lag and Barnacle, but there at the edge of the flock we notice a small party of darker birds which eventually turn to face us and reveal the bright white plate above their bills – White-fronted Geese, an unexpected sight and all the more satisfying for it. A single Pink-foot is associating with another haughty group of Grey-lags. A pioneer of the large flocks of its brethren that will adorn these marshes over the coming few months.

A wisp of Snipe wheeze overhead and flocks of Dunlin, Lapwing and Golden Plover wheel and twist over the marsh, spooked by some unseen raptor. And then we hear the ‘ping’ of Bearded Tits from the reeds bordering the river itself. We stand atop the river bank, and after a while are rewarded with the brief sight of a splendid male foraging low down in the thick accumulation of reed litter. Such endearing little creatures, and so colourful.

A movement from the dyke side vegetation alerts us to the presence of a pair of perky Stonechats hunting flies and other insects from conveniently tall perches of reedmace. These birds seem quite tolerant of us slowly stalking them, and even fly towards us to try their luck flycatching. We keep pace with them, blessing our luck and excited by the challenge of taking close-up pictures of such delightful, colourful, ever-active birds.

Dotted about the marsh we see several Chinese Water Deer, surprising one such as we round a bend. This poor creature awkwardly lollops away, and it is clear something is wrong. It pauses after attaining a safe distance, turning to look at us with its teddy bear face and raised ears. The problem is plain to see, a broken and badly swollen right foreleg which looks painful and is surely infected. One of its ears seems mangled as well, so perhaps some fight with a rival has resulted in this, probably fatal, injury.

Along the cinder track leading back to the car park near the station, we admire groups of Wigeon whose evocative whistling cries now echo across the wetland expanse. A few fly back and forth above us before the whole group takes sudden flight as a vividly coloured female Marsh Harrier floats between them. The swirling ducks are safe from this predator when airborne, but will then provide good targets for the Peregrines that hunt these marshes all winter. The harrier drifts away further north to hunt the unwary.

Rooks and Jackdaws enliven the scene on any day here, especially towards an autumn or winter dusk when they gather en masse to roost in the wet woodland carr nearby. Some were already congregating on the marsh uttering their raucous caws; talking to one another in a language indecipherable to us. I snap one as it flies above me, more to test out the performance of my new lens than anything else, and am delighted to find I’ve captured the bird with an acorn in its bill and several more stuffed in its crop. A lucky shot, depicting how these birds make the most of nature’s bounty at this time of year. The acorns will be stashed somewhere to provide a food source for the coming months when natural supplies get depleted.

Another Stonechat delights us with its confiding nature, flitting around a tangle of bramble where a pair of Wrens chase one another just a few feet from where we stand. All around the Wigeon whistle, the Jackdaws chirp, and Lapwings give their mournful cry. A Buzzard circles the distant wood, a Kestrel hovers in search of rodents, Little Egrets stalk the shallows. It was a miserable beginning at Buckenham Marshes, but when the sun broke through it was sheer magic.

6 thoughts on “Buckenham Marshes – After the Rain”